Schedule of Events and Activities

History of the Fonda Fair

The 1916 fair was the 76th annual exhibition given by the society. The present value of the grounds, buildings, and appurtenances is $16,000 and the extent of the grounds, all owned by the society, and comprises 26 acres. During the past year there was erected, at a cost of $365.42, a building containing fine, new horse stalls. Besides this, a new platform was erected in front of the grandstand, also a new fence was erected and the judges’ stand and the new building were painted.

The total number of exhibitors for premiums at the 1916 fair was 126. The aggregate number of paid admissions was 15,336 but on the grounds were hundreds of children each day for whom, the first time in the history of the fair, no admission was charged and so that number does not by a large figure represent the actual attendance.

The entry fees for competition for premiums are as follows: 10 percent of 1st premium on livestock, farm implements, stoves, and harness and dairy products. For fruit & vegetables, 15 percent. For poultry, 25 percent for ladies needlework, painting and drawings, 10 percent. School work and in the children’s department entries are free. 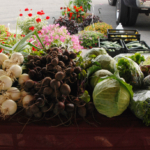 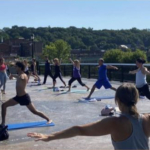