Canajoharie is located in Montgomery County, New York, south of the Mohawk River and Erie Canal. Canajoharie was an important village of the Mohawk Nation that became known as Upper Castle with Europeans settling the area in around 1723.

The Village of Canajoharie, NY

Along the Mohawk River, Canajoharie boasts beautiful river views with a marina perfect for loopers, historic architecture, shops and restaurants. The Arkell Museum, a world class art and cultural center, is a must visit.

Earliest known records show that the area was the home of the Mahican, later known as the Mohawk, an Algonquin tribe that migrated from the St. Lawrence sometime between 1500 and 1600. The area that now makes up the village was first settled by Europeans in 1723 when Palatinate Germans settled the area as a result of the Burnetsfield Patent. The settlement was “Roof’s Village”  by the early German Settlers. It was after the Revolutionary war that the area was renamed to its Iroquois name, Canajoharie, meaning, “the pot that washes itself” referring to a geological feature in the Canajoharie Creek.  The village was incorporated in 1829.

Riverfront Park is located on the south shore of the Erie Canal and Mohawk River just east of Lock 14  near the Route 10/Church St. bridge. The floating docks provide docking space for boaters in addition to a concrete dock where the canal and Canajoharie Creek meet. Boaters will find that Riverfront Park offers free docking, power and water with benches and shelter. There are no restrooms available at the park. 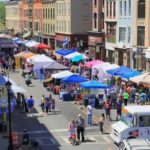 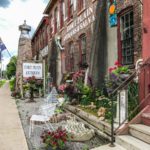