“We believe through our efforts to collaborate with MVEDD and the many committed partners supporting this project, we can help continue to be an agent for positive change in our region.”

The Mohawk Indians were the first inhabitants of the area that is now called the Town of Minden. The Mohawk Indians belonged to what the British called the “Five Nations”, or the French called the “Iroquois Nation”. The other tribes of this nation were the Oneidas, Onondagas, Cayugas and Senecas; the most eastern tribe was that of the Mohawks. The Mohawks controlled the area from Albany westward to the Susquehanna and Delaware Rivers, and as far north as the St. Lawrence river. The Mohawks and their fellow tribesman would come to play a legitimate role throughout the Mohawk Valley during America’s war for independence.

The first known white settler to settle in the Minden area was that of Jacob Crouse around the year 1720. The earliest white settlers were Palatine Germans farmers who migrated from Schoharie and settled in the area called Dutchtown. These earliest settlers had very few skills and most of their necessities were most likely bought from Schenectady. They were an illiterate people and had no schools, few books, and no newspapers.

This part of the valley that became the Town of Minden was very sparsely inhabited prior to the American Revolution. The first store, which was also used as a trading post, was opened by William Seeber in 1750 near the Sand Hill area. Around this time in the Sand Hill area the first church was erected and called the Reformed Dutch Church of Canajoharie. This church was later burned down in 1780 during the revolution.

In 1772 Tryon County was formed from the western most part of Albany County. This new county was divided into five districts, and Minden fell into what was then called the “Canajoharie District”. 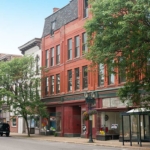 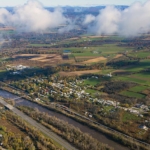