Historic Herkimer, NY, is a village and the county seat of Herkimer County with a population of 7,293 as of the 2020 census. First inhabited by the Iroquois Confederacy, it was later included in the Burnetsfield Patent of 1725. This area is home to the earliest European-American settlement this far west in the Mohawk Valley.

The Village of Herkimer, NY

Located north of the Mohawk River, Herkimer is steeped in history. It was settled by the Palatine Germans in the early 1700s and became known as “The Village of Herkimer in 1788. Today, the village offers residents and visitors many opportunities including higher education at Herkimer College, Herkimer Diamond mines, recreation, shopping, dining, and many historic locations.

What’s in a name?

“In 1788, following the Revolution, the New York State Legislature met in Poughkeepsie to erect new towns in what was then Montgomery County. The names of German Flatts and Herkimer had been agreed upon to designate the two towns. Dr. William Petry met Honorable Simeon DeWitt, Surveyor-General of the State of New York, who had maps and a survey before him. DeWitt asked the doctor as to the situation of each. Looking up the river, (toward the west), Dr. Petry answered, “Herkimer is on the left and German Flatts is on the right.” DeWitt, assuming the doctor meant the right and left banks of the Mohawk, as the stream flowed, wrote the names on the map in reverse order. The name of Herkimer had been intended for the territory south of the river where the historic Herkimer family first settled and where the Herkimer Home is situated to this day. The error in understanding was enacted into law.” – Town of Herkimer, NY 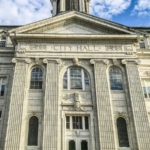