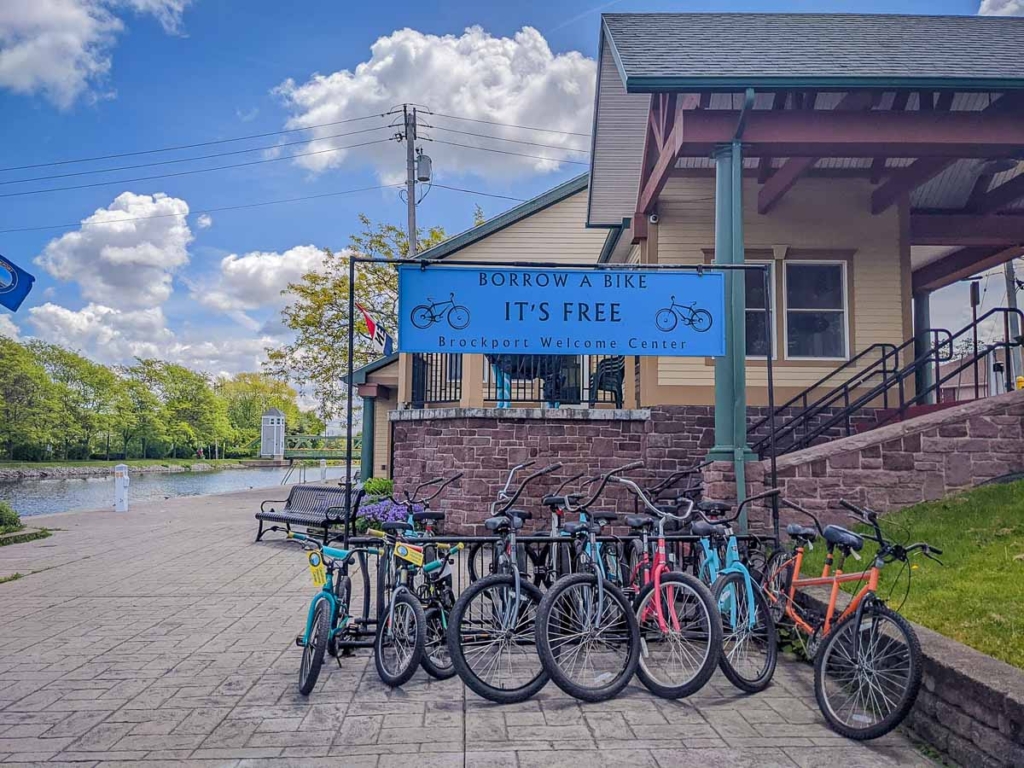 Bikes available to borrow at the Brockport Welcome Center, which offers visiting cyclists and boaters various resources and amenities

New report summarizes Brockport’s activity as the first Empire State Trail Town, and outlines recommendations for village to harness visitation to the Erie Canalway Trail to support and advance local tourism and the outdoor recreation economy

Trail Town webpage on www.CycleTheErieCanal.com will help visitors discover all that Brockport has to offer as a destination along the Empire State Trail

(BROCKPORT, NY) – Parks & Trails New York and the New York State Canal Corporation today announced the release of the Empire State Trail Town Action Plan for the Village of Brockport. The plan is designed to provide Brockport with concrete recommendations and strategies that the community can implement to capitalize on the growing outdoor recreation economy and enhance quality of life for its residents.

In early 2022, the Village of Brockport was selected as the “pilot community” to launch the Empire State Trail Town program.

With a long history of bicycle and pedestrian advocacy, a vibrant main street just off the Empire State Trail, and a welcome center for canal and trail users, Brockport demonstrated many of the characteristics of a trail town from the start. Participating in the program offered the village an opportunity to reflect on how these assets could serve as a means to increase trail-related tourism and visitation, and what changes could be made to improve the bicyclist and pedestrian experience in the community and along the trail.

PTNY worked closely with the village through an intensive six-month process to evaluate existing conditions, develop recommendations and strengthen community capacity so that work could continue beyond 2022. Through a community survey, public listening session, and on-the-ground assessment, PTNY found that Brockport’s strengths lie in its dedicated residents and community groups, public events, and high-quality amenities and services for trail users. This research also identified the room to develop stronger relationships between businesses and the trail, enhance on-road bicycle and pedestrian infrastructure, and improve promotion of the town and its resources through physical signage and through social media and other electronic media.

To help the Village keep moving toward its long-term goals, PTNY proposed a set of eleven recommendations.

Six of these identified improvements and modifications to physical infrastructure, and five sought to address promotion, programming, and policies in the village. Key recommendations for strengthening Brockport’s ties to the trail included: 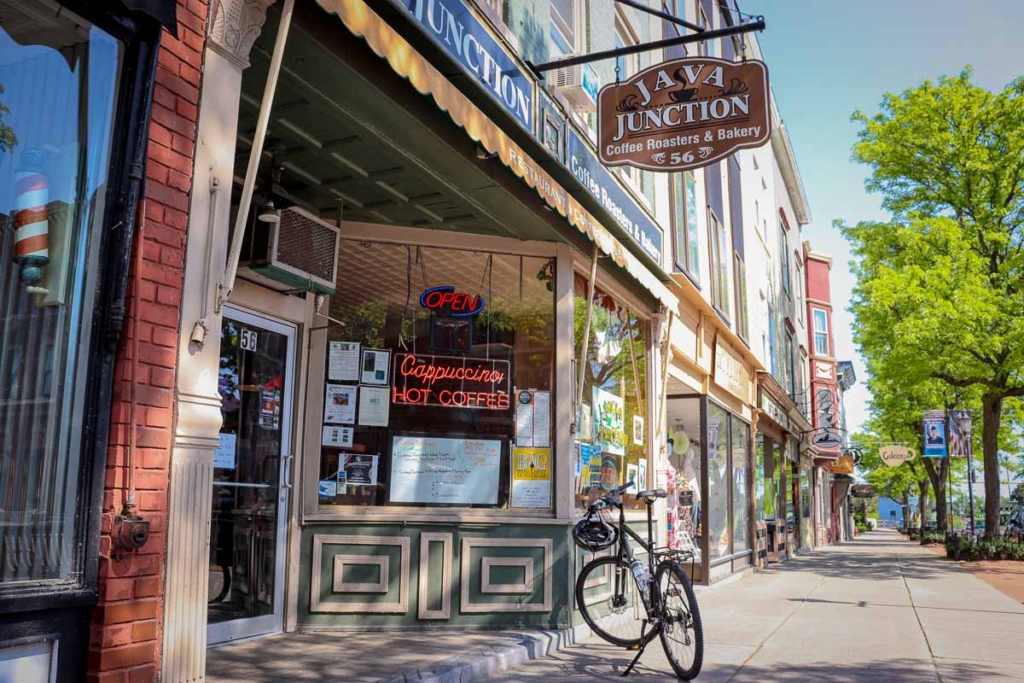 Bike out front of Java Junction, a Bike Friendly New York certified coffee shop and bakery, a staple of the Brockport community.

As part of its designation as an Empire State Trail Town, the Village received a promotional Trail Town landing pageon Parks & Trails New York’s www.CycleTheErieCanal.com website to help visitors find information about the first Empire State Trail Town and discover all it has to offer. Now live, the page provides information about what makes the Village unique, its most notable festivals, and other essential visitor information like parking, services, and amenities. The webpage also includes an interactive map of the Village to help trail users plan their visits.

With this action plan in hand and new promotional resources at its disposal, the Village of Brockport is poised to capitalize on its designation as the first Empire State Trail Town and take full advantage of the Empire State Trail/Erie Canalway Trail as a destination for dynamic visitors from around the world and a valued community resource for residents.

“Brockport has so much to offer Canalway Trail travelers, and this action plan highlights key measures that can be done to ensure that they’re taking full advantage of this great resource. We look forward to building on the progress here in Brockport and expanding the benefits to communities across the Empire State Trail.”

“The village of Brockport has warmly welcomed trail users, boaters, and canal enthusiasts for many years, and the newly released action plan provides Brockport with strategic recommendations that will strengthen and promote its connection to the Empire State Trail and the Erie Canal. As the Empire State Trail Town program expands throughout the canal corridor, we look forward to our continued partnership with Parks & Trails New York as we share Brockport’s success with other trail and canalside communities.”

Margaret Blackman, Mayor of the Village of Brockport, said,

“It has been a privilege to work with PTNY as a pilot trail town. They helped us realize how many assets Brockport already has and we leveraged them together in this project. The detailed action plan PTNY carefully prepared will be our guidebook moving forward.”

Parks & Trails New York (PTNY) is the state’s leading advocate for parks and trails. Since 1995, PTNY has worked in partnership with the Canal Corporation to create a trail system that is an asset to nearby canal communities and a destination for bicyclists from around the world. PTNY organizes Cycle the Erie Canal, an eight-day bicycle tour along the historic Erie Canal that attracts more than 650 participants each year. In 2021, the organization published an updated version of the popular guidebook, Cycling the Erie Canal: A Guide to 360 miles of Adventure and History along the Erie Canalway Trail. Learn more at www.ptny.org. 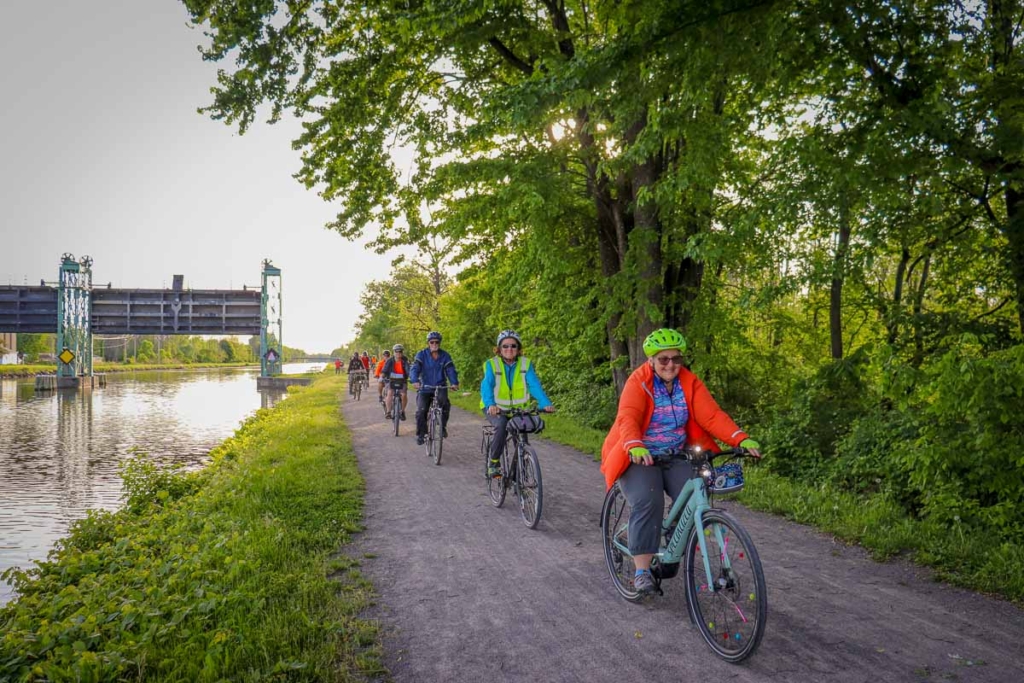 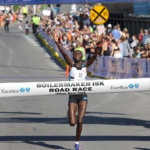 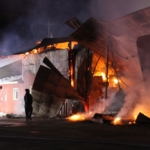